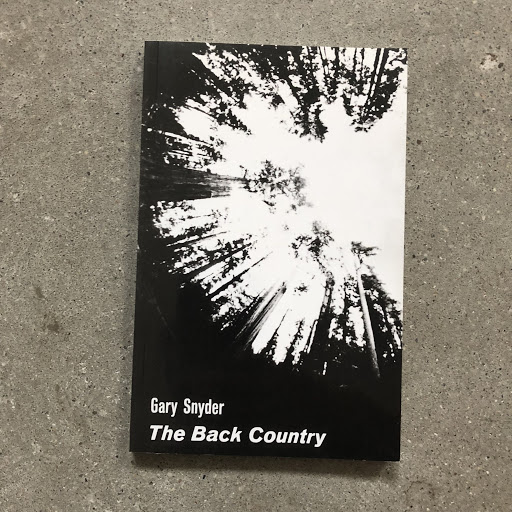 I've long admired Gary Snyder's dexterity of language but there was a different feel in approaching one of his single collections than encountering anthologized pieces or his selected. His 1968 book, The Back Country, runs deep with riveting observations, unusual, tactile use of words, and the complex portrayals of the frissons between the natural world and the material world (a "Van Gogh print on the wall: vase of flowers all yellow / & tawny"). It also houses his translations of the Japanese poet Miyazawa Kenji. Fittingly, having the translations at the end of The Back Country, it is immediately clear that their work shares similarities, and that Snyder's work is indebted to him (" flash of a crow flapping / up from a treetop / --spiritless woods-- / --the atmosphere clearer and clearer / cypress trees standing to heaven / in a dead hush--"). Snyder's poems are rich in sound and textures and telling details about the human condition: "The Chainsaw falls for boards of pine, / Suburban bedrooms, block on block / Will waver with this grain and knot, / The maddening shapes will start and fade / Each morning when commuters wake-- / Joined boards hung on frames..." His ability to capture tone, malaise, and those gnarly natural descriptions--more tough and dirty than lush and serene, is stunning. The pieces read a bit like journal sketches along his different journeys in the wild and yet they maintain engrossing perspectives: "... high in a pine-- / from behind the cypress windrow / the mare moves up, grazing. / a soft continuous roar / comes out of the far valley / of the six-lane highway--thousands / and thousands of cars / driving men to work." And later, "... all these crazed, hooked nations need: / steel plates and / long injections of pure oil." Snyder obviously prizes nature versus the human-made, but perhaps because he is so physically immersed in the natural world and his crisp, terse syntax is so involving,  his poems never feel obvious or pedantic. I appreciate the leanness of his compact, noun-heavy lines--intriguing compound words like "nuthatch," "bullhump," and "buckbrush." Among his travels and his forest-living, there are moments of disdain for humans: "... sightseeing buses crammed. / to view bare rock, brown grass, / space..."; and also moments of longing for connection: "I don't mind living this way / Green hills the long blue beach / But sometimes sleeping in the open / I think back when I had you."

Email ThisBlogThis!Share to TwitterShare to FacebookShare to Pinterest
Labels: 1968, gary snyder, poems, poetry, the back country