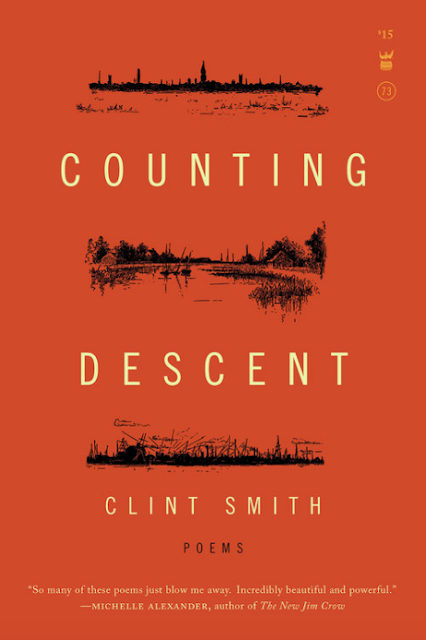 Some poetry carries the trait of aloofness, others feel very "felt." Clint Smith's large-hearted poems in his collection Counting Descent are in the latter category. I was initially struck by the spareness, the straight-forwardness of the book, and then did a second read and was enlivened by all the fascinating conversations and associations the poems were having with one another. The title poem is mostly in quatrains--a rich autobiography of familial bonds through the numeric, finally landing on the experience of a young black man: "I celebrate every breath, tried to start counting / them so I wouldn't take each one for granted. / I wish I could give my breath to the boys who / had theirs taken, but I've stopped counting / because it feels like there are too many / boys & not enough breath to go around." Other counting goes on from shout outs and jump shots to the cabs that pass a black man to black victims of racial violence. Smith expresses these painful observations keenly and plainly. The interrelation of the word "boy," in the racist sense, is interlaced with the speaker's boyhood. There are poems where the inanimate, the "un-human" speak to "the black boy," like the fire hydrant ("putting a boy against the wall / so the dogs / have an easier time"), the cathedral, the window ("when someone breaks you they call it inevitable"), and most strikingly, the cicada: "why you think we roll in packs? / you think these swarms are for the fun of it? / i would tell you that you don't roll deep enough / but every time you swarm they shoot / get you some wings son." The experiences of black boyhood are expressed in distinctive scenes such as a seemingly innocuous hotel parking lot Super Soaker fight which ends with a father's warning and fears: "Told me I couldn't be out here / acting the same as these white boys-- / can't be pretending to shoot guns / can't be running in the dark / can't be hiding behind anything / other than your own teeth." Perhaps this "hiding behind teeth," is one reason why Smith writes, "I can want so desperately / to show you all of my skin, but am more afraid / of meeting you, exposed in open water." How to break beyond the "Presumed athlete. / Free & Reduced sideshow. / Exception & caricature. / Too black & too white / all at once" in "Ode to the Only Black Kid in the Class"? The poems also depict the images of the incarcerated, like the boxy piece "Beyond This Place" ("They / want people to remember that they once existed / beyond this place, that they still do."). A sweetly-painted scene of a kitchen dance between mother and father emerges in Smith's descriptions and humor: "... smoke alarms are going off... / Their hands are clasped / now, fingers interlocked, / swinging each other back & forth. / Their feet are now music / of their own." The range of subjects in this book is impressive and expansive.