your new feeling is the artifact of a bygone era 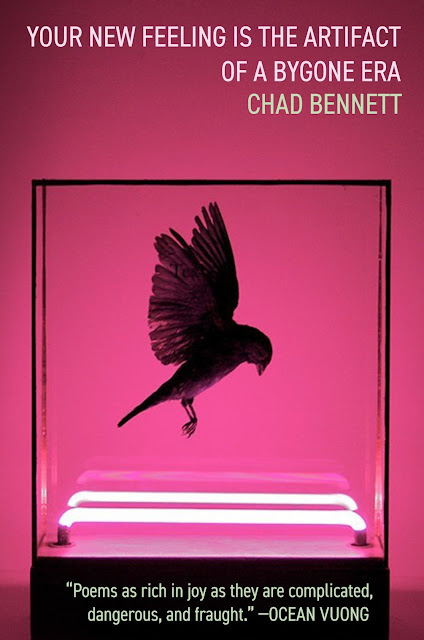 One call-out I thought was interesting in Chad Bennett's poetry collection, Your New Feeling is the Artifact of a Bygone Era, was the idea of the "fade out." It's mentioned in what seems like the centerpiece poem of the book: "Silver Springs," based upon the Fleetwood Mac, but inherently Stevie Nicks, song. "... lately I have been listening to songs, like 'Silver Springs,' that fade out, pretending / but refusing to go away." It's a numbered list poem, directed at someone ("Do you know who you are?"), perhaps a past relationship, and it intricately links the data and atmosphere of the song with this "you." The video clip of the live performance, a track from The Dance, is well-known for Stevie's fiery performance in front of Lindsey Buckingham, and her refrain "You'll never get away..." This collection is haunted ("Boy at the century's / jukebox, hammered, / same furious song / on repeat), and it attempts the feel of the fade out, seemingly knowing that effect is impossible sonically in poetry--an ending is an ending--and poems are naturally doomed to build to them, making them one of the trickier things to always land on. Bennett references one of the most famous trick fade outs in a pop song I can think of, Elvis Presley's recording of "Suspicious Minds." The speaker in this collection indeed feels "caught in a trap" between the past and present--the artifacts (like dying phones or a "GIF to show in time-lapse every moon- / blooming flower opening on to worlds that narrow to a / light-latched close"). Through the pop song-like use of repeated phrases and the often spare, sketch-like shapes of the poems themselves, an overriding jagged-ness and anxiety emerges ("My throat, tongue, my lip to testify / While on TV the secret century leaks"). There's much to admire from Bennett's use of language and his melding of a wide array of figures and influences.