have you seen this man? 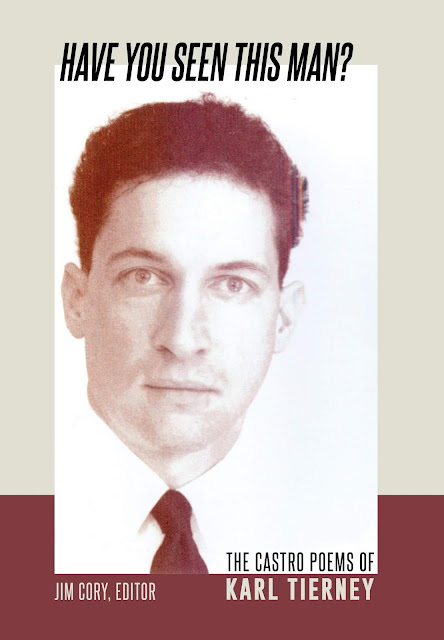 Years ago, I discovered Karl Tierney's work reading a few of his poems in Persistent Voices: Poetry by Writers Lost to AIDS, edited by Philip Clark & David Groff. One of his poems in the book, "Funereal," shifted the earth under my feet. I admired its careful craft, but I also felt suddenly emotionally connected with a voice that was so distinct and unusual from a name I hadn't heard of before. The poem moves from the historical and grand--"One whole ship set with an entire fire, / wasted on a dead Viking" to the painfully "real": "Satin in a coffin ... Who knows which is more apropos for laying grave side / flowers of plastic or flowers of silk / when there's not only a new decade and another country / but a fresh millennium just around the corner." The death here is personal, so it feels enormous, enveloping, and Tierney paints it with a historic sweep; but there's also a knowing in the ultimate insignificance, especially when it comes to the triteness of funeral aesthetics. This voice of urgency, of erudite, of wit and slight indignation, culminates in the crafting of a dynamic piece that runs the gamut of observation and feeling. When I was co-editing the now-defunct online journal Clementine, I reached out to the executor of Tierney's poems, Jim Cory and asked him if I could publish some of his work. He graciously sent me a slew of poems and I chose three from various points in Tierney's life. At that point I didn't expect to see a collection years later emerge from Sibling Rivalry Press, and I am so happy one did.

"Funereal" appears in the 1991 portion of  Karl Tierney's collection of Castro poems, Have You Seen This Man? and it's just one of the jewels in a both modest and extraordinarily rich collection. This book has been sitting on my bedside table for months. Is there some sort of trepidation that writers sometimes face when they read the poems of another writer whose work they connect with so deeply? Perhaps because you want to engage with it so wholly, or perhaps because it's too much to bear. Karl Tierney's life was cut short at 39 years of age when he jumped from the Golden Gate Bridge in 1995. He had been sick with AIDS. He made sure to contact Cory in the event of his death to take care of his work. Jim Cory's introduction to Have You Seen This Man? is especially poignant--lovingly detailed with moments of acerbic reflection of the life and times of Tierney. In linking Tierney's work to O'Hara, Cory sums up much of Karl's poems vividly--"... the voice is both casual and intense. The poems sometimes sound like someone sharing a confidence with intimates, at other times, they could be rants delivered across a cafe table. Much of their subject matter--cruising, dating, soggy overnight assignations, fumbling attempts at relationships and the recriminations that often follow--concerns the search for erotic satisfaction, if not connection..."

This searching moves through the years, from 1983 to 1995, Tierney's coming-of-age as a poet in the midst of such devastation. I admire his ability to capture expansive subjects succinctly. On "Beauty": "It comes from nowhere  /and has the disturbing quality / of knowing your desire." On "Turning 30": "... one discovers there's no age / when one doesn't feel awkward..." On "Vanity": "... for two hundred dollars / I buy a vanity mirror and have it inscribed / Resentment is the Potting Soil of Scars." If Gary Snyder's The Back Country feels like artfully-constructed diary entries from the natural world at the mercy of the material world, Tierney's poems feel like artfully-constructed entries from the material world (the female impersonator "MacDonna" figures, a poem which doesn't seem so keen on Madonna) at the mercy of the natural and also the historical. Through the years, Tierney's voice understandably grows more complicated and complex, with lines running back and forth with various switching of tone, attitude and stance ("I saw your eyes in the brothels of Tangier. / Oops! Wrong century. All right, then..."). The earlier poems sometimes have a winsome quality, like observing the "Arkansas Landscape: Wish You Were Here" poem where "red-nosed boys from the hills / walk free from sin-shod shoes / through the collegetown mall. / Everywhere there's hair blowing / (brown mostly) / and the bushes huddle together / animated in conversations about the sea..." The consistency is within the craft. Most poems have killer openers ("He sits stiff as Lincoln / on my Salvation Army chair...) and killer conclusions ("The good ones have died / or can't afford a face-lift / and wont answer the phone"), fitting since Cory notes Tierney was meticulous about both filing his poems and writing and editing them. Though none of the pieces have a sterile quality--they are very much alive and reeling. And many intricate portraits emerge--the ghosts of Tierney's times--from the bar rag publisher (his "obituaries ... another / name to scratch and claw from his great black book") to the "Adonis at the Swimming Pool," elegantly drawn until the stinging closer "Who would have me discussed in seedy cafes / and ruin me since I'm deaf to the hiss / behind the teeth in that inspid smile." And the poems are deeply rooted in the changing Castro neighborhood, on the brink of and in the midst of 90s gentrification: at a film retrospective "that closes with this Salò, this controversial / gem, the poet-filmmaker's final reel before murder, shown in / a neighborhood whose men are mostly dead or about to be." These are thorny, unpredictable poems of people in the midst of death and great social upheaval--clubgoers (painted fantastically in "Club Uranus" after Auden--"hounds tie bandanas round sagging necks / coyotes buckle silver above crooked tails / old wolves smolder in leather / and sly young foxes preview naiveté in shorts / when not the season / this is called going out"), yuppies, punks, pretty boys, "twinkies" like "Skippy" from "what everybody's calling Generation X / which is something like a brand-name credence / suffering from what Bush called "the vision thing." / Issues around lack, very American"--all of these people are sketched out in multitudes. The country at large is changing as well as the collection hints at the fading of the old American political gatekeepers (like Nixon and Jackie O) for the incoming powerful like Bush and Elizabeth Dole ("... this cold-tit whore you present in ridiculous pumps / as some sort of liberal is far away your worst assault on truth") of the new conservative movement of their time. "Brutally Honest" and labyrinthine is how I would describe Tierney's portraits and [poems and they always link back to the speaker's psyche, pain and predicament. One the eve of turning 40, alive writer / reader to long-gone writer, I feel fortunate to have your collection that I felt I could finally bear to read--one that has specificity, joy, savagery, and now permanence in this world.

"Language Could Kill Us" by Patrick Nathan
Posted by MrJeffery at 3:52 PM