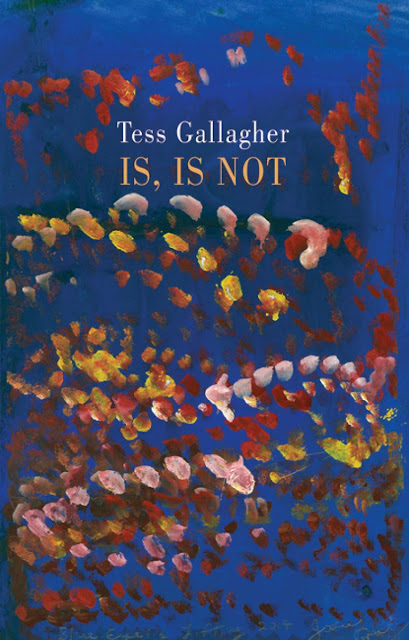 "Instead of 'Come in' she says 'Not now.'" Like Stephen Dunn's Pagan Virtues, Tess Gallagher's Is, Is Not is a rigorous read. The poems could be described as opaque, but there's a challenge more in the use of language and the physics of situation. Association and sentences sometimes move past what I felt would normally be a comfortable, familiar stopping point. The book itself is quite a lengthy tome too. I literally felt the language trying to push itself, twist itself. Perhaps the whole "is, is not," the "two doors," is the paradox that lies within many of the poems: "sad-happy"; "live step, dead step" (with each step forward, we get a little closer to death; "steps" also lead to "mystery ... How else let difference tell you / what you are?"). The poems are often having direct conversations with others, friends, or even illustrating a conversation with something itself, like "Breath": "... breathe it / open to the glass world. It / breathes back / to prove neither it / nor you can end / this exchange of breath / for worlds." There are moments in the poems of the unending--of an almost obsessive circularity: "I come. I go. You stay. You keep on / staying. I come again. You are here." Or in the description of "March Moon": "How unsatisfying half is / even when heading / full..." Admittedly, I was doubting myself if this was at least somewhat the intended effect until I reached Gallagher's "Afterword" which, like Kimiko Hahn's essay in Foreign Bodies, gives a fascinating look into craft: "The kind of poetry that seeks a language beyond the very one in which it arrives may travel from edge to edge... I find myself trying to out-leap what I can almost say... I seem to be writing in some sense beyond language." And later "[my poems] challenge dualities which tend to blot out a range of possibilities." So yes, there is something more than just simple paradox, the simple two doors, and the simple "is, is not." Gallagher's lyricism attempts to stretch beyond.

Email ThisBlogThis!Share to TwitterShare to FacebookShare to Pinterest
Labels: is, is not, poems, poetry, tess gallagher