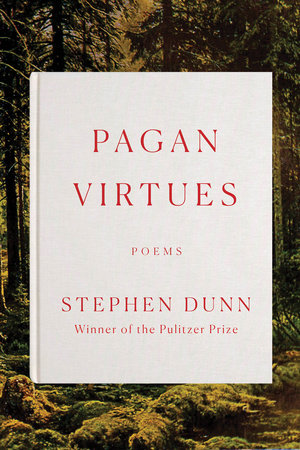 With Pagan Virtues, that Stephen Dunn is up to his 19th poetry collection among an oeuvre of dense and intelligent work, is certainly admirable. There's a slyness to the language here and a resistance to the melodious and the pretty. This can make Pagan Virtues a challenging read musically and aesthetically. But there's no doubt that Dunn has accumulated noteworthy skill. The collection becomes an invite to an inner voice of trickery, contradictions and paradox. Optimism becomes a "vulgar passion." In "Misfortune," the smell of it is "clean they way rain that has yet to arrive smells clean." The title poem hints at the moment we're in where "the inner weather of our nation" is "dimming" (and perhaps the moment we are always in): "everything that smells of dogma / or the forbidden... investigate what's good, / attempt to live in a world a person from / another world might want to much around in..." I love that use of "muck" which is vaulted as both a terrible and casually pleasing connotation. Doubling and alter-identities is explored in "As If Chekhov Had Written It," which references The Americans, an ultimate television show of doubling identities physically, psychically, and culturally. Dunn's poems grapple with death here too, such as in "The Ghost Song of the Retiree" or "The Year Before the Election" when "all the poets / seemed to be dying..." and not of "suicide, or" drinking "themselves into oblivion," as associated with poets, but of "natural causes." Or works directed to "my eulogist," such as "A Postmortem Guide": "I stumble and fall, / shake and drool, but history's daily horror / trumps any condition of mine. What is it / compared to genocides and demagoguery?" There's also a series of "Mrs. Cavendish" poems which routes through an intimate relationship. While Pagan Virtues might not be as shiny and enveloping as other contemporary works I've read this month, its adroitness is undeniable.